By Mohit Mudliar and Chadana Pusapati 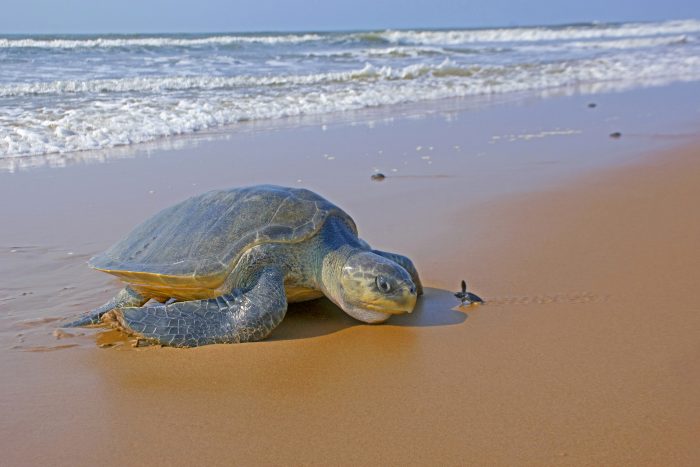 A large part of the world was struggling with Covid-19 during the last week of March 2020 while in our field station in Ganjam, Odisha we were discussing whether the arribada (the mass nesting of olive ridley turtles) would begin on March 20th or not. Dakshin Foundation has been working with the Odisha forest department for the past 12 years on monitoring olive ridleys on Rushikulya beach. We had the necessary permissions from the department to carry out research and collect data but had no idea when the arribada would begin. Calls from family and friends kept pouring in to ask about the situation here and when we would be returning home. Turtle nesting had come down due to the rains that week and the weather forecast predicted more rain to come. Our hope of seeing an arribada was fading and we began planning our return home. Then on March 21st at 3:30 AM, we received a call from Bipro, our field assistant, saying that the turtles had started to arrive by the thousands. We picked up our backpacks and rushed to the beach where we were finally able to witness the spectacle of the arribada. It was particularly special after waiting the entire previous season with no luck at all. The sunrise was even more spectacular with no clouds and the turtles shone under the first rays of sunlight.

We returned from the beach at 7 am to get some sleep as we had only had an hour of sleep the night before. At noon, we got another call saying that the arribada had started again during the day and so we rushed once more to the beach.

Just a night ago, we had been skeptical about whether the arribada would happen at all this year and here we were observing it during the day. Little did we know that more surprises awaited us, something we were least prepared for. In the evening, we saw that turtles were arriving only in a two-kilometre stretch of the beach and hence made plans to count turtles only in this area. When we returned after dinner, we got the news that turtles had also started nesting on another one-kilometre stretch that we had left out as there had been no nesting there earlier.

We quickly split up and made a team of three to monitor the new stretch. This stretch started from a fishing village called New Podampeta. This part of the beach had many fishing nets most of them considerately packed in thin bags/tarpaulin so that the turtles wouldn’t get entangled in them. One of these nets however was not packed properly and about thirty turtles were entangled in it. So at midnight, we were disentangling these turtles and at the same time convincing our parents over the phone that we would be home as soon as the arribada ended. 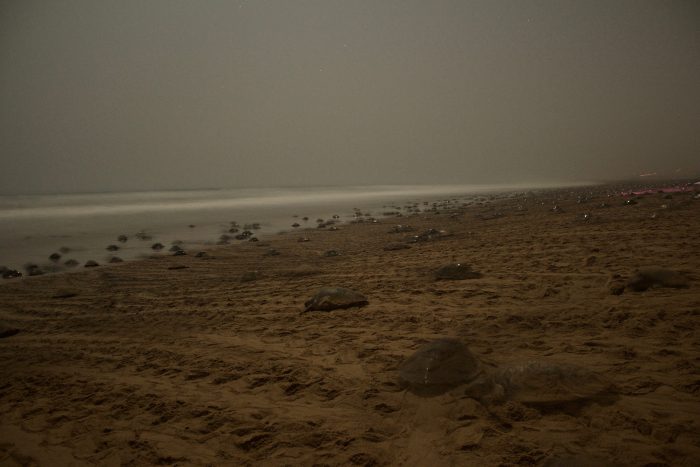 While we were counting turtles on the first day of arribada, a complete lockdown was announced for the next day (March 22nd) which was supposed to last till 9 pm. The field staff on our team had never witnessed the mass nesting occur more than once during the day in their decade long experience. They were convinced that there would be no daytime nesting the following day and so we made plans to count turtles after the curfew ended. To our surprise, mass nesting started during the day on March 22nd but we had no option but to wait till 9 pm. We planned fieldwork such that we maintained social distancing norms with teams 100 meters apart and each team member at least 5 meters away from the other while counting turtles. 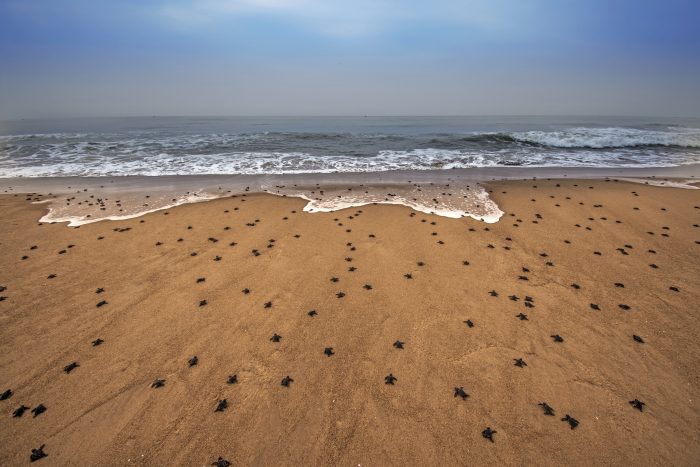 The turtles arrived in the day again on March 23rd and counting continued through the day and into the night. Thankfully no daytime nesting occurred on March 24th so we could get some sleep and we returned to the beach for the night counts. Before we could begin that night, we started getting calls asking us to check the news. The Prime Minister had announced a complete national lockdown of India from midnight of the same night. We had to cancel our work and leave the beach to prepare for the lockdown.

Soon the news reports of mass nesting started filling the media claiming that turtles had arrived due to the lockdown and the absence of human disturbance. These reports did not make much sense, and glorified the lockdown without understanding the biology of turtles. In fact, Rushikulya is generally empty with just a few fishermen. The tourists arrive in Rushikulya only when the arribada occurs and they do not really disturb these turtles.

For us, 2020 won’t just be the year of the pandemic. We will remember it as unusual because there was a relatively late start to the arribada in Rushikulya and nesting occurred during the day for 3 consecutive days. The hatchlings from this year’s arribada started emerging on May 6, while the country remained in lockdown. After wrapping up all the field work that could be done this season and bidding farewell to all the turtles and the hatchlings, we’re back in our respective homes waiting for things to crawl back to normalcy.

We would like to thank Argya Adhikary, Chetan Rao and Saurabh Chakraborty for their images, appearing in the order of their names.