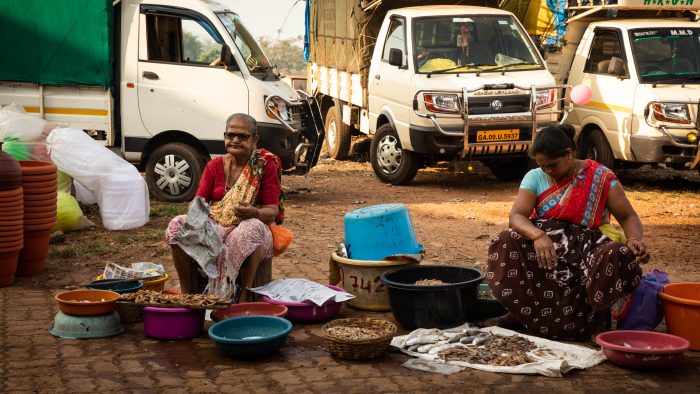 Media coverage on issues of marginalisation and social injustice can sometimes be skewed, silencing certain voices and narratives in deference to dominant power structures and societal norms. Women in fisheries represent one such group that is marginalised within an already marginalised community. Women’s issues, though critical, tend to remain invisible as much of the dialogue is often focussed on fishermen. The lockdown has only aggravated this situation, severely impacting women in fishing communities across the country.

The ‘Fisherwomen in Lockdown’ social media series is an attempt by Dakshin and partner organisations to balance this inequity, amplify these voices and put forth stories from the ground that one wouldn’t otherwise hear amidst all the chaos. The series features several short videos of fisherwomen describing how the lockdown has affected their lives and livelihoods. The videos are posted on Dakshin’s social media channels along with an appeal to the viewers to donate to the crowd funding campaign set up to aid distressed fishworkers and their families.

The idea for the series originated in online meetings with partner organisations such as the National Fishworkers Forum, Social Need Education and Human Awareness (SNEHA), Tamil Nadu, and United Artists’ Association (UAA), Odisha, that are committed to gender equality and the welfare of fishworkers more generally. To communicate the issues realistically, we wanted to invite women to speak about their problems themselves rather than have someone else speak on their behalf. However, this was easier to ideate than execute. Sourcing videos from remote coastal villages during a lockdown was certainly challenging and wouldn’t have been possible, but for our networks in these regions formed over years of engagement.

It was through these local partners and fishworker unions that we were able to reach out to women in remote villages and get their stories. We received a total of 25 short videos within a short span of two weeks and are still trying to gather more first-hand accounts from the ground. Once the videos came in, they needed to be processed. This meant translating the content, adding English subtitles, editing and enhancing the quality of the video footage which was mostly low-resolution. Not all of these skill-sets were available in-house, so we did the next best thing — we hollered for help!

Designers and filmmakers responded to the call enthusiastically and helped us get these videos ready for social media. We are grateful to Aditi Singh, Samyuktha Srikanth, Madhumita Rangarajan and Sutanu Satpathy for their help and solidarity. Priyanjana Dutta, filmmaker and journalist, retraced some of the women from Kendrapara, Odisha, who had been featured in her 2014 film ‘Chronicles of Oblivion’ and made short videos highlighting their current distress. Her Twitter posts helped the issue gain significant visibility.

The series is a good example of people with different kinds of expertise working synergistically and is proving to be a valuable learning experience about the power of social networks (people as well as media platforms) in communicating an important message. We would therefore also like to appeal to our readers to share these posts widely and help us amplify the voices of fisherwomen like Kumari and Malarkodi.

Through these short videos, the ‘Fisherwomen in lockdown’ series echoes the very real tales of hunger, exclusion and destitution from some of the remotest parts of the country caused by the sudden nationwide lockdown. The hope is that with this series we can help these voices reach out to people from different walks of life leading to increased sensitivity and empathy about this inconspicuous, yet highly vulnerable segment of our society.

We would like to thank Kamesh Bharadwaj and Manini Bansal for their images, appearing in the order of their names.