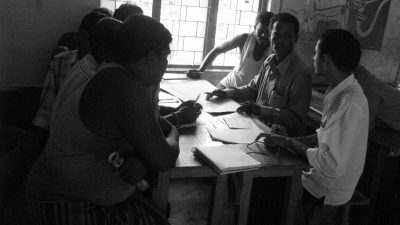 In 2004, Dakshin played an instrumental role in supporting the formation of the Odisha Marine Resources Conservation Consortium, which is a network of Odiya traditional fishworker’s unions, conservation organisations, development NGOs, sea-turtle biologists and others interested in sea turtle conservation and sustainable fisheries in Odisha.

Dakshin serves as a core committee member of the OMRCC and has collaboratively produced a book on different fishing technologies and practices in the state and two documentaries on local conservation challenges. These documentaries have been screened for government officials and communities in various coastal villages in Odisha and has served as bases for rich dialogue between various actors, on highlighted issues.

The OMRCC has also supported in consolidating and raising the concerns of the Odisha Traditional Fish Workers’ Union (OTFWU) in the form of an official statement against some of the rules and restrictions imposed on fishing in the Gahirmatha Marine Sanctuary and other important turtle nesting sites along Odisha’s coast. Dakshin’s book, Marine Fishing Craft and Gear of Odisha, have also been distributed among local government bodies to help inform the discussions on previously imposed blanket bans on particular fishing nets and gear.

More information about the OMRCC can be found at www.omrcc.org.