The NCPC is a national network of fish worker unions and representatives from environmental and social justice-focused organisations including NGOs and legal, research, media and civil society groups. Formed by the National Fishworker Forum (NFF) in 2007 and still under its leadership, the NCPC emerged in 2007 after a series of collaborative campaigns by the NFF and various environmental groups (including Dakshin) in response to socially and ecologically harmful changes in coastal and marine policies. The goals of the NCPC are to advocate for community-inclusive protection of coastal ecosystems and security of communities’ rights over their coastal commons and natural resources. 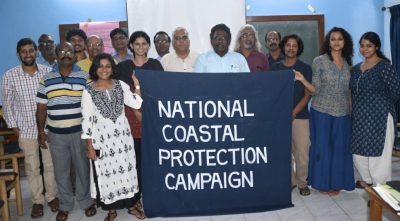 Dakshin has served as the Secretariat and a core group member of the National Coastal Protection Campaign (NCPC) since 2009. In addition to Secretariat support, Dakshin contributes to the NCPC by tracking, spreading awareness and initiating action on important coastal plans and policy developments. We appraise the social and ecological implications of policy decisions and work with members of the network to build fisher capacities to participate in governance processes and have their interests reflected in coastal decision-making. We also drive and support the NCPC’s own institution-building and outreach activities.

In addition to national-level campaigns such as the ones outlined above, Dakshin continues to support NCPC partners in their various regional campaigns against coastal environmental and rights violations, policy changes and short-sighted development plans.