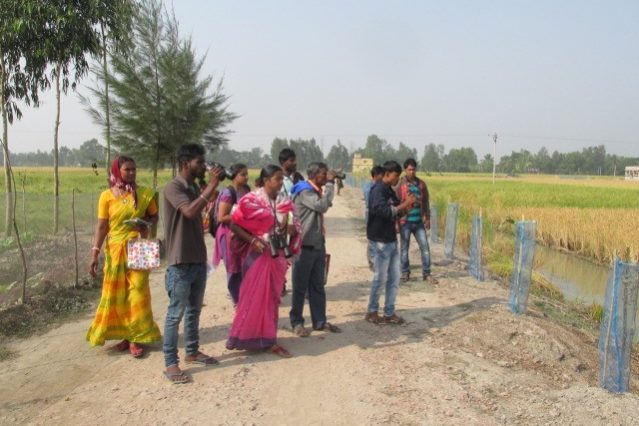 In early December James and I went to the island of Kumirmari in the Sunderban area to conduct a bird watching workshop for budding tourist guides in the area. Over a span of 4 days, we assisted them in identifying about 35 resident and migrant birds.

Sunderban, “the only Mangrove-Tiger land of the planet” (Banerjee M, 2012) with “its own social, cultural and ethnic identity since 200 to 300 AD as mentioned in the story of Chand Saudagar” (Radice, 2001); with its “several hundred different kinds of plant species, several species of fishes; a major habitat of shrimps, and a major pathway for induction cycling and pollution reduction” (Sarkar M, 2013), was definitely not love at first sight for us. After having lived for a while in the bright greens and blues of the Andaman and Nicobar Islands, the Sunderbans seemed wet, brown and bleak. The thick fog that wove its way around and over the isles, the muddy waters that couldn’t make up its mind about being sweet or salty, and the scrawny people enveloped in a fine sheen of dust, peeking over our shoulders to get a glimpse of our Whatsapp chat on the dunghi that carried us to Kumirmari did not help in anyway. I suppose our growling stomachs accounted for a small portion of the bias the above statements carry. 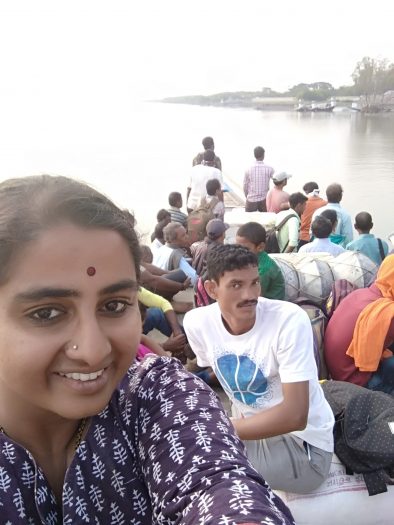 Kumirmari has a population of 18,000 and is found in the Gosaba tehsil of South 24 Parganas district in West Bengal. Located about 70 km away from Kolkata as the crow flies (or I suppose, more apt is, as the Jio signal flies), we arrived at Kumirmari after catching a local train from Sealdah to Canning (1.5 hours; Rs.15 per head), taking a local shared-autorickshaw from Canning to Dhamakhali (1 hour; Rs.35 per head), huddling on a crowded dunghi that chugged its way down the river from Dhamakhali to Kumirmari (3 hours; Rs.25 per backside that dares park itself on the hull of the dunghi due to a lack of space).

Having begun our journey at around 6 am, the chai and a few of the thorny pani phal (water caltrop or Trapa sp.) we had managed to devour had sublimated into nothingness at some point during the first half of the journey and by the time we reached Kumirmari at 4pm, even the worms in our stomachs were dying from the lack of sustenance.

That far in the east of India, it is twilight by 3:30 in the afternoon and midnight (for all practical purposes) by 8 pm. Planting our dusty, malnourished backsides on plastic chairs at what we thought was a restaurant in the market at Kumirmari, we gratefully gulped down the local slightly salty but potable water. The “restaurant” turned out to be a “Mishty”-only shop (welcome to Bengal). The shopkeeper grumpily warned us that each Rasgulla would cost a hefty sum of Rs.5 as he saw us stuffing ourselves greedily, the echo of worms cheering us on from within.

This brief sweet escapade was followed by an extremely bumpy ride on a “van”, a 1.6 HP motor fitted to a custom-made chassis which bore 3 wheels, a chain connecting the front wheel to the back wheels, motorcycle-style breaks, a handlebar above the front wheel with a headlight behind which the driver sat, and finally a six by four feet wooden plank that was fitted to the chassis on which passengers could try and make themselves comfortable. I bravely seated myself at the rear end of the vehicle while James played safe and took the VIP spot beside the driver. The van remotely resembled a bullock-cart yoked with a bike built for the differently abled, in lieu of the oxen.

After riding across the breadth of the island, we got down at Kheya Ghat and trudged along the river bund, which surrounds the whole island, for about half a kilometre to finally arrive at our destination for the day, the home of a local farmer where we were welcomed by our unenthusiastic host (this was the first time they were hosting strangers from a land far away in their home) and with whom we stayed for the next five days.